On Day #7 – At approximately two in the morning, when I couldn’t sleep,  decided to re-visit the greatest sequel of all time: Bride of Frankenstein (released in 1935).

Bride of Frankenstein is brilliant. The returning cast of Colin Clive (Dr. Frankenstein), Boris Karloff (The Monster), and Dwight Frye (he plays a Karl in this film, though played Fritz in the original Frankenstein) serve to form the initial basis the ‘Frankenstein Universe’, as it were. However, the addition of Elsa Lanchester (playing the double-role of Mary Shelley and ‘the Bride’) and the creepy and fun Ernest Thesiger (playing Dr. Pretorius), is what makes Bride of Frankenstein the classic that it is.

Boris Karloff brings a new dimension to his role by engaging in dialogue, as opposed to the guttural noises and grunts he makes in the first film. William Hurlbut wrote the script to Bride, with much input from director James Whale. The dialogue is one of my favorite aspects about Bridge of Frankenstein. The monster learns the concepts of ‘good’ and ‘bad’, has a clear understanding of ‘life’ and ‘death’, ‘friend’ and ‘foe’, and other conceptual dualities, which I find not only entertaining — but to some extent, fascinating.

One of my favorite scenes is Bride is the scene where the Monster enters a poor, blind villager’s hut. Because the villager cannot see him, he doesn’t scream, run away or attack him, as the other villagers inevitably do. The two begin to form a real friendship, and it’s a moving, sensitive moment in the film which I admire. One can feel the love and companionship between these two men — that is, until, the other villagers break in and ruin everything!

The musical score by Franz Waxman is perfect. The scene where we first see ‘the Bride’ –with her long, flowing wedding gown and her crazy beehive hair with the silver zig-zags, her plush lips, her pretty features, and the scars around her neck — the Waxman score kicks in full force with a powerful orchestral swell and the chiming of bells. If not for the Waxman score, this scene would have lost the power and edge that it commands.

Note: Una O’Connor returns is a returning cast member as well, playing the character of Minnie. Una serves as comedic relief in her roles throughout the Universal films, and it’s quite fun to watch her facial expressions and body language.

Note 2: There are some interesting allusions between The Monster and the crucifixion of Christ. The Monster is fundamentally misunderstood and betrayed when the villagers hunt him down and tie him to a pole which easily could have been a crucifix. In fact, a more obvious connection to the crucifixion was written in the original script, but was deemed blasphemous by Universal and had to be removed.

This is Rob Zombie’s directorial debut. It starts out as a run-of-the-mill horror film, yet increasingly becomes more disturbing and zany as it goes on. In fact, the last fifteen minutes brings House into a whole other realm of hidden, monstrous evil.

The cast in House is really entertaining, and Zombie’s cinematographic sense is on full display here. I especially enjoy Bill Moseley performance as Otis Firefly. His pale face, stringy hair, and crazy rantings are simultaneously scary and fun.

I love Season of the Witch. It may be my favorite of the Halloween sequels. And I love it for precisely the reason why it was so poorly received by critics and viewers alike — it doesn’t have anything to do with Michael Myers or the previous two films in the franchise.

Season of the Witch, taken as its own film, features a fresh and inventive story line and a solid cast of actors, including: the rugged Tom Atkins, the cute Stacey Nelkin, and the threatening Dan O’Herlihy.

The reason for Halloween III not having anything to do with the previous films is due to the idea that each Halloween film would be its own unique story, forming an anthology series. This idea, obviously, didn’t go over well. People preferred a repetition of ‘slasher formula’ — which I find unfortunate.

Still, Season of the Witch is great fun and has many tense, creepy moments throughout.

This film is based off the novella by Joe Hill and Stephen King. I haven’t had the pleasure of reading the novella yet, but I look forward to it, as Hill and King are among some of my favorite writers.

Perhaps I was in a particularly susceptible mood, but there were several moments when In the Tall Grass creeped me out! I have a high tolerance for horror films, and only a few of them frighten me. So I think this speaks to the effectiveness of the film.

The cast was engaging and the concept is original and interesting. I found a couple conceptual inconsistencies near the end of the film, however, and this did interrupt the flow for a me a bit. All in all though, In the Tall Grass is a good horror film and I recommend it.

I grew up with this film, and to the great surprise of society-at-large, I have not grown up to become a serial killer in Charles Lee Ray’s footsteps.

The darkness of Child’s Play is, looking back, a valuable asset which the other films in the franchise miss out on. A lot of Chucky fans prefer the humor, and I enjoy it too, but the darkness of this first film is a quality which I find to be almost intoxicating.

The movie has its faults. I really enjoyed Chris Sarandon’s character, Detective Norris, until the end of the film, where he ‘wusses out’ over a knife wound to his leg and ceases attempting to save six-year-old Andy Barclay and his mother, Karen. So, it’s up mother and son to defeat the possessed, killer ‘Good Guy’ doll at the film’s end — kudos to them.

The special effects in Child’s Play holds up especially well after these twenty-some years, which I find impressive. Chucky becomes burnt to a crisp in a fire, then has his limbs severed one by one. Yet he keeps coming! When I was a child, this was a terrifying scene to watch. These days, however, I’m apt to quote Monty Python, “It’s only a flesh wound!”

October 4th – I enjoyed a few cups of coffee and watched Cat People (released in 1942).

Cat People is a Val Lewton production for RKO, and one of the things which separates these 40’s Val Lewton films from the rest of the B-movies of its time is the sleek lighting and quality cinematography. While this isn’t one of my personal favorites, the film features decent acting and an interesting subtext regarding the primitive subconscious and sexual desire.

Incidentally, Cat People was directed by Jacques Tourneur, whom I greatly admire for directing one of my favorite horror films of all time — Night of the Demon (1957).

While The Beyond features inconsistencies in its plot, it may be adequately argued that this was intentional. The film plays off of surreal qualities, making it a sort of nightmarish hallucination. There are many moments of shock in this film, the most cringe-inducing perhaps being the scene were a bunch of spiders gang up on a guy and feast upon his flesh (even going to the extreme of biting a chunk out of his tongue and destroying his left eyeball).

Like I said, cringe-inducing. Also cringe-worthy, unfortunately, is some of the awkward dialogue which take place among characters. However, this awkwardness is about par for b-flicks, isn’t it?

Note: there is much symbolism to be found about eyes in this film. It seems to suggest that evil can make us blind.

The ending of this film is fantastic because it reveals something greater, more cosmic, more expansive than the land of the living — hence, ‘The Beyond’.

Zombie is the film which launched Lucio Fulci to cult stardom. It brings zombies back to their voodoo origins, yet retains their relatively contemporary flesh-eating nature. Now, I’ll take Romero’s Dawn of the Dead over Fulci’s Zombie any day, but one thing I’ll say about Zombie: The make-up on these zombies are highly original and unique, and far more provocative than the simplistic blue/purple faces of the zombies in Dawn of the Dead.

This flick has its share of bad acting and credulous dialogue, but remains very entertaining. The scene where a zombie battles a shark is fantastic — a scene, in fact, which was filmed without Fulci’s permission! I’m happy that it was.

It’s now a contemporary tradition to watch a horror film for each day of the month of October in celebration of Halloween. This is what I intend to do, simply because I love horror films, I enjoy sharing horror cinema with fellow fans of the genre, and most importantly, because it seems like a fun thing to do!

Generally, I prefer watching old horror films from the 30’s, 40’s, and 50’s. Yet I’ll be starting the month off with some more recent cinematic terrors.

I think The Lords is among Mr. Zombie’s best work as a writer and director. The film features a creepy, building tension which ends in quite an epic pay off at the end. The cast is especially great and the characters are relateable. For example, I felt much empathy for Heidi Hawthorne (played by Sheri Moon Zombie) and her increasing psychological disintegration and habitual relapse into drug-addiction. The actresses cast for the part of the witches were superb, namely: Judy Geeson, Meg Foster, Patricia Quinn, and Dee Wallace. The handsome Bruce Davison also plays a scholar on the Salem Witch Trials in this film.

With lots of vibrant cinematography, beautiful set designs, solid acting, and a plot with substance, The Lords of Salem really packs a creepy punch.

Unfortunately, I don’t have much to say about 31, other than I didn’t enjoy it. It’s got plenty of gore, but zero substance. The characters were flimsy and I couldn’t find myself rooting for any of them. Maybe I did root for Sheri’s character to some extent, but that’s mostly because I’m a fan of other roles she’s played in other movies.

The plot is standard with nothing new brought to the table. The ending, too, was disappointing. The most interesting part of the film for me, was Richard Brake’s  intense opening monologue. 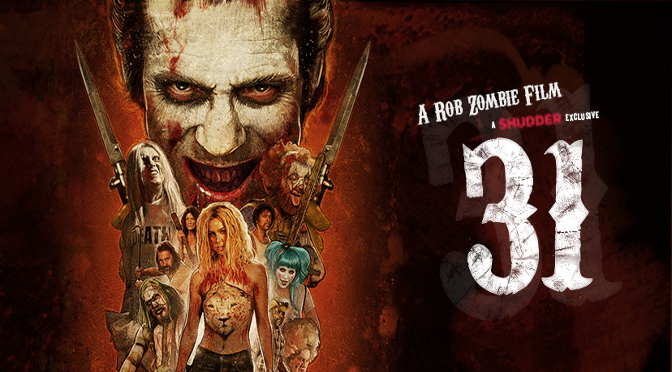 What I find intriguing about the Blair Witch is that we never really see the witch, and there is no gore in the film. Yet make no mistake, this is one creepy flick. The sound effects are very effective, allowing the audience to want to lean in, and, much like the three main characters, ask, “What the hell was that!?”

The actors are especially good in performing as average, young Americans attempting to make a documentary about a local legend. The performances seems so natural and effortless that it makes the film seem very real. In fact, the marketing for The Blair Witch Project utilized this element (is it a film, or is it really found footage from three missing documentary filmmakers?) previous to its release in theaters — with great success. The first film to be wide release and marketed on the internet, Blair Witch grossed $250 million dollars worldwide on a $60,000 dollar budget!